Evolution of the tpg Network

In accordance with the canton's Mobilités 2030 strategy, tpg plans to strengthen its offer by continuing to extend its network of tramlines and by introducing a bus rapid transit system. These extensions and new public transport services will be interconnected with the Léman Express rail network.

Extension of the tramway network

After the entry into service of Line 17 towards Annemasse on December 15, 2019, other tramway network extension projects are expected to materialize beyond the Franco-Genevan borders in the coming years with the extension of lines 14, 15, and 17 to Vailly, St-Julien, Ferney-Voltaire, St-Genis, and Annemasse-Glières. 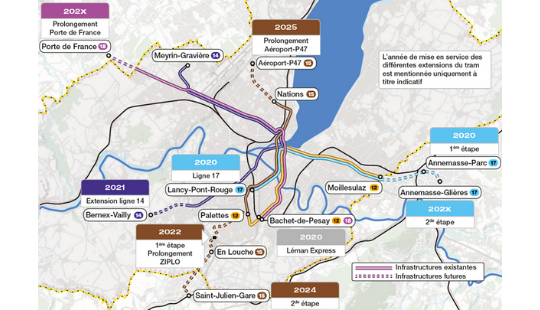 Work on extending Line 14 began in February 2019, with servicing scheduled to begin in December 2020 . The tramway will make four additional stops from P+R Bernex: Pré-Marais, Luchepelet, Robert-Hainard, and Bernex-Vailly. This extension of Line 14 is in response to the ongoing urbanization in the municipalities of Bernex and Confignon, which will experience a strong increase in population by 2026, mainly via the appearance of 1600 homes and 1600 jobs for the former and 200 homes for the latter.

Extending Line 14 will strengthen the current public transport offer and improve service towards the city center and the stations of the Léman-Express. With a tramway every 4.5 minutes during rush hour, the inhabitants of Bernex-Vailly can reach Bel-Air in 27 minutes and Cornavin in 32 minutes.

Guaranteeing on-time, smooth service is essential for passenger satisfaction. In an often crowded urban environment, public transport has difficulty keeping up with the pace and speed expected by passengers. In fact, densification of traffic on certain roads, especially those in areas of urban development, can often slow down buses. The Bus Rapid Transit (BRT) system, consisting of a high-frequency service via a route that is entirely or at least partially operated on an exclusive right-of-way for high and reliable commercial speed, is the solution for absorbing the increase in traffic and providing service for the new housing, study, and employment zones.

Since the goal of a BRT is to guarantee an attractive commercial speed for passengers, stop locations must be well-chosen in order to serve the adjacent neighborhoods as efficiently as possible. The construction of P+Rs near BRT stops should encourage intermodal mobility for workers.

tpg is currently working on three BRT projects which are planned to be put into service as part of the 2020-2024 public transport action plan: one would link Cornavin Station and Vernier, another would go between Frontenex and MICA (Mon-Idée – Communaux d'Ambilly) via La Gradelle, and the last one would connect Ferney and Gex. Two of these routes are to be operated by bi-articulated electric vehicles (one as a trolleybus and the other with on-board electric technology) in order to comply with the Air Pollution Control Ordinance.

Tpg looks to the future

Learn more about our activities today and our projects for tomorrow...